Not a lot of companies sell female orcs. I think that this is because most universes in which orcs live, orcs are created or spawned, so they don't have a need for female orcs. Now the GT Studio Creations' orcs have a lot in common with the Warhammer orcs. Both in looks and in the fact that they do have female orcs.

The GT Studio Creations' female orcs aren't just females but also fierce warriors who fight alongside with their male counterparts. There are orc female queens, champions, warriors and wolf riders. They are, however, a little bit smaller and less bulky compared to the male orcs. 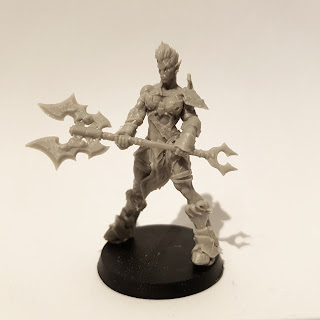 The cast of this Orc Female Warrior is super clean! There was a little flash on the weapon and I had to clean up the resin vents but other than that there were no issues to fix or moldlines to remove.

The Orc Champion V2 had some mold lines on the hammer and also some gaps where the arms connect to the body, but nothing a little putty and a quick scrape with a sharp blade won't fix. It is still a very imposing looking orc! 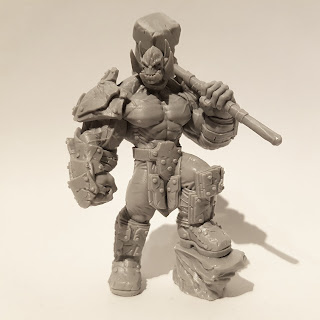 The Orc Champion V1 and the V2 are based on the same figure. Basically, the two models only have different arms and a different head, but the changes are significant enough to change the entire stance of the mini. And when I say mini, I don't really mean mini, because this bad boy is 60mm high, while in the 1/48 scale range.

I really like the Orc Champion V2 because of his collar. I was building a base for the V1 champion, but changed my plans and will use the V2 for this base instead! The fact that the two miniatures have the same legs and torso makes this easy!

I guess that concludes this article. For now, I have nothing more to say about these figures.

I will continue working on my vampire creature bust, Kahl-Agul, by Karol Rudyk and I need to find him a good plinth to display him on when he is done.